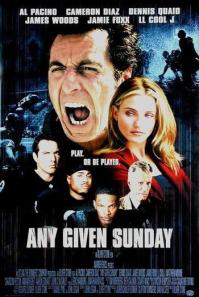 One thing that sometimes infuriates me about sports movies is when the “sportness” of that movie comes off as fake or inauthentic.  Not explicitly so, like mistakenly calling a touchdown a homerun, but in subtle ways that you’d only recognize if you were an avid sports fan.  Like, the way a pitcher winds up to throw a baseball.  Or the way a basketball player dribbles down the court, while calling out a play.  These seem like small, insignificant details, but if they happen to come off as false, it can be deadly, as the worse thing a movie can do is seem phony.  That being said, Any Given Sunday (Oliver Stone, 1999) does a really good job of getting it right.  Despite the fictional football league, the fictional teams, and the fictional players, it actually feels mostly authentic.  Helping this matter, of course, is the fact that the movie is populated by a ton of former players and coaches.  From Jim Brown to Lawrence Taylor to Barry Switzer, these appearances elevated Any Given Sunday to a more authentic level.  Be that as it may, I do have to say that if you’re not a sports fan, or a football fan in particular, you may not catch these details and there’s a decent possibility you’ll be bored before halftime.

Luckily, there’s a lot going on here other than football, especially stylistically speaking.  Some noteworthy choices are the cinematography, which is largely done in inspection-like close ups, as well as the loud, pounding score, which gets the adrenaline rushing.  But perhaps the most interesting technical element is the editing style, which appears to be driven entirely by montage.  By this, I mean the movie is constantly cutting from one shot to another in a rapid-fire way, like you might see in a crazy action sequence or an experimental music video.  Apparently it took 4 editors to accomplish this, and while it led to a fast paced, ultra kinetic movie, I wouldn’t be surprised if it also led to a pounding headache for the viewer.  All of these choices ended up shaping a tone that felt more like a war movie than a sports movie, which creates an interesting parallel between the hierarchies of the military, the hierarchies of professional sports, as well as the spectator nature of the uninvolved citizenry in both.  We happily cheer for our soldiers and our players when they’re in battle, but what happens afterwards?  After the war is over?  After the game has finished?  Do we bring that same intensity in helping these people rehabilitate after the fact, or do we look to save money and write them off instead?  On that note, I actually think Any Given Sunday was way ahead of its time, as it is now fairly common to discuss players’ safety and the effects the game has on the body and mind.

On a lighter note, I probably shouldn’t go on any further without mentioning Al Pacino, who I think is perfect for the role of an aging head coach.  I mean, really, what’s better than Al Pacino constantly yelling at the top of his lungs and giving fiery halftime speeches?  Offering their support is an extensive cast of actors (everyone seems to be in this movie) all of whom give strong performances, most surprisingly of which were the football players themselves, including Lawrence Taylor, a non-actor former football player, who was actually really powerful in this movie.  Even L.L. Cool Jay was competent in his role.

The movie is close to three hours in length, and so it’s more than just a story about an old football player clinging on to his legacy while a young player strives to build his own.  It’s also about race.  It’s about drugs.  It’s about ego.  It’s about war.  It’s about sacrifice.  It’s about coming together.  It’s about loneliness.  It’s about the tension between young and old.  The tug and pull between the past and the future.  But most importantly, it’s about respect.  It’s about how the younger generations and the older generations, while they may not always understand each other, need to learn to respect each other.  The young can learn from the traditions of the old, but the old can also learn from the naiveté of the young.  Together, with mutual respect, I’d say there is no limit to what can be achieved.