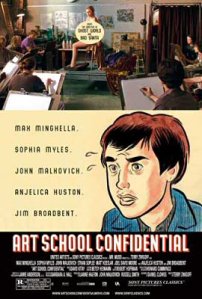 One of the aspects I admire most about a Terry Zwigoff film— and Art School Confidential (Terry Zwigoff, 2006) in particular— is that they seem to be entirely devoid of pretentiousness.  Well, except for maybe Ghost World, which has some definite quirk to it, and therefore is probably the reason why I like that Zwigoff film the most.  I guess I just prefer pretentiousness in movies… but that’s a different story.  As far as this film goes, there’s no razzle-dazzle photography.  The structure is straightforward and to the point.  It doesn’t attempt to break ground stylistically or otherwise.  It just is what it is, and it doesn’t care what others think.  And that’s not only why this film is endearing, but it also happens to be the underlying message.

Now, whether this film accurately portrays “art school” or not, is beside the point.  What it does do, and this is more important than the context, is it captures the “feeling” and the mind-set of what it might be like to go to “art school.”  Funny enough, it reminds me of this segment I recently saw on the Oprah Winfrey Network, where she was interviewing a high-ranking film executive from Paramount.  One of the more indelible lessons from that interview was about “staying in your own movie.”  By this, they meant that everyone’s life is like a movie, and that each of us is the star actor of that movie, and our director just happens to be God.  But what they stressed most about this metaphor was the importance of “staying in your own movie,” and in a way, that’s exactly what Art School Confidential is about.

Or to put in a slightly less metaphorical way, it’s about finding and expressing your true nature.  It’s about the desire to fit in and the quest of finding that place in which you truly do fit.  Juxtaposed to this, and thus illustrating the point, is an eloquent line of dialogue delivered by Malkovich’s character:  “He’s trying to sing in his own voice using someone else’s vocal chords.”  This, in a nutshell, is every artist’s, and even every human’s dilemma.  Who am I?  Why am I?  And while some may find their true calling rather easily (lucky bastards), most of us will struggle in making this discovery.  The reason for this, I think, reflects what I was saying earlier about “staying in your own movie.”  When we envy other people’s success, and compare ourselves, and get caught up in other people’s lives (or in other peoples’ movies), we get discouraged and lose our way.  When we’re in denial, or have unrealistic expectations, or have flawed motives— we lose our way.  We end up trying to sing with someone else’s vocal chords rather than our own.  In this way, Art School Confidential is a strict order.  That is, “listen.”  Listen to your voice.  Stay in your movie.  Stay on your path.  In the end, you will get to where you need.

I'm Kane, a screenwriter who lives in Los Angeles. END_OF_DOCUMENT_TOKEN_TO_BE_REPLACED
This entry was posted on Tuesday, October 2nd, 2012 at 3:22 am and tagged with art, Art School Confidential, comedy, entertainment, John Malkovich, movie review, Oprah Winfrey, Terry Zwigoff and posted in Movie Review. You can follow any responses to this entry through the RSS 2.0 feed.
« 15. Any Given Sunday
17. Away We Go »