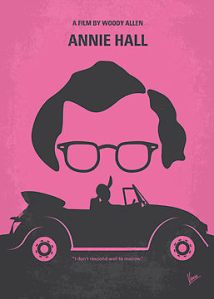 This girl once asked me what my favorite movies were.  I wasn’t prepared at the time to give a substantial list of movies; so instead, I chose to rattle off a bunch of directors’ names that have influenced me.  Truffaut.  Kubrick.  Anderson.  Tarantino.  Lynch.  Jarmusch.  Linklater.  Apatow.  Bergman.  Godard.  Kieslowski.  I’m not sure exactly what names I spouted at the time or if they were impressive, but we ended up talking about Woody Allen.  And in particular, we started talking about Annie Hall (Woody Allen, 1977).  And I remember she asked me, in a very straightforward way: “why do you like it?”  I was completely taken aback by the pointedness of this question, and I hadn’t seen the movie in some time, so I struggled mightily to formulate a satisfying response.  If I were to be asked that same question now, on September 24, 2012, some thirty-five years after the initial release, I would say this:

I like Annie Hall because even after all of those years, and after all the rip offs and imitations, this romantic comedy still somehow comes across as surprisingly fresh, wickedly smart, and extremely experimental.  The disjointed structure and the breaking of the fourth wall, reflects all of those qualities, and more importantly, allows the story to stay fresh no matter how many viewings.  Speaking of fresh, the dialogue is witty almost beyond belief, resulting in too many one-liners to keep track of.  One-liners like, “Hey, don’t knock masturbation – it’s sex with someone I love!”  Or, “My grammy never gave gifts.  She was too busy getting raped by Cossacks.”  Or, “That sex was the most fun I’ve ever had without laughing.”

Adding to the brilliant script is the gritty cinematography offered by the master of darkness, Gordon Willis.  The simple rawness, and the graininess of the film print comments perfectly on the messiness of relationships as well as the setting in which the story takes place (New York).  And while the photography comes off as simple and straightforward, there is actually a lot of movement and some really beautiful, breathtaking compositions.  The fact that this does not intrude on the story or bring too much attention to itself, demonstrates exactly how great a director of photography Gordon Willis actually is.  I often wonder why more comedies don’t aspire to this kind of higher level, photographically speaking.  I’m sure there are many logistical reasons for this, including budgetary restraints, but I would be really interested to see a Judd Apatow-type movie shot by, say, Roger Deakins.

Another timeless, ever-lasting element of Annie Hall is the sizzling chemistry between Woody Allen and Diane Keaton.  They seem perfect for each other.  This palpable energy creates the impression that these two characters are a real couple that has shared real memories.  This, in turn, compliments the way the story unfolds in its hyperactive disjointed manner, which conjures the tone of a casual conversation between two former lovers commiserating about the past.  And just like in real life, these conversations don’t unfold in chronological order, but in chunks of random memories, that remind you of other chunks of memories, that remind you still of other memories.  And despite this disjointedness, I never felt lost, and actually found it rather easy to follow along, which speaks almost entirely to the strength of the transitions between scenes.

But alas, this is a romantic comedy, and therefore it is about love.  In particular, it’s about an island of a character (Alvy Singer), a person who typically shuts himself off from others, but because of this amazing woman (Annie Hall), he is finally able to start to open up, and he even gets a glimpse of true love.  Problem is, it’s too late.  The feeling isn’t mutual.  In this way, I admire how Annie Hall is different from most other romantic comedies.  In most, the love is obvious.  It’s a special feeling one gets when in the presence of their soul mate.  It’s a golden light that emanates, and it’s just a matter of time before they both realize it.  And maybe this “true love” sensation exists in real life, but I think that that’s actually something else.  It’s lust.  Good chemistry.  Kindred spirits, perhaps.  But true love, true love as shown in this movie, is born out of time.  Out of ups and downs.  It happens gradually and it isn’t a specific feeling, it’s something that dawn’s upon you over time.  And most importantly, it’s not guaranteed.  It’s never ever guaranteed.

With that, I’ll go ahead and wrap my impression of the entire movie up with one metaphor.  If Annie Hall were a cupcake, I’d say its foundation would be misanthropy, comedy would be the icing, and sentimentality would be the sprinkles on top.  I have to say, it makes for one hell of an original confection.

I'm Kane, a screenwriter who lives in Los Angeles. END_OF_DOCUMENT_TOKEN_TO_BE_REPLACED
This entry was posted on Monday, September 24th, 2012 at 7:49 pm and tagged with Academy Awards, Annie Hall, comedy, Diane Keaton, entertainment, gordon willis, movie review, oscars, romantic comedy, Woody Allen and posted in Movie Review. You can follow any responses to this entry through the RSS 2.0 feed.
« 13. A Mighty Wind
15. Any Given Sunday »