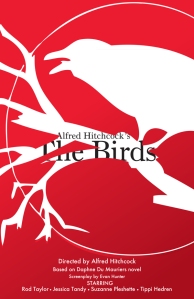 The first thing that comes to mind after watching The Birds (Alfred Hitchcock, 1963) is the question: WHY?  Why a lot of things, but specifically, why did the writer choose to write this story?  I don’t ask this pejoratively; rather, I’m genuinely curious as to what happened in the real world that initially ignited the flame behind this concept?  This certainly isn’t a question I ask of all the movies I watch, but something about The Birds’ totally absurd subject matter really pushes this question to the forefront.  I wonder, for example, if a bird once shat upon the writer?  He must’ve been so infuriated!  Or maybe the writer witnessed a profound incident at a pet store in which a bird was freed from his cage and then pecked the eyeball out of an unsuspecting patron.

I don’t know what it was, but the result is a paranoid-ridden love story between two characters, each who have serious issues with their mothers (one has no relationship, the other has an over-bearing relationship).  Then, halfway through, this unnerving love story suddenly becomes a survival movie, in which, you guessed it, the birds go wild, and relentlessly start attacking the humans.  Per usual, Hitchcock doesn’t go out of his way to explain why this happens, it just is.  And perhaps this minimalist approach is what prompts the question, “Why?” in the first place.  And perhaps the answer to this question is just as minimal and straightforward as any other Hitchcock film, and that is, there is no answer.  There is no reason.  It’s simply entertainment.  It’s primal and it’s fun.  There’s nothing deeper or more to it than that.  This very well may be the case, but honestly, the distinction doesn’t make a licking bit of difference anyhow.  Because you cannot have context without subtext and you cannot have subtext without context.  Whether intended or not, all films hold a greater subtext (because they exist).  Therefore, regardless of a movie’s quality, the potentiality of a deeper interpretation, one not based on a matter of fact, but of a subjective response to the material— always exists.

And as far as the context goes, I’d say this: The Birds is a disturbing, well-made, rigidly constructed film, much like an elaborate piece of furniture from Ikea.  That is, a bunch of unappealing parts that when put together very carefully makeup a mostly satisfying whole.  What’s rather surprising is that the most effective sequences are indeed the birds-on-attack scenes, despite the outdated, almost laughable special effects.  Somehow these far-fetched sequences still successfully come across as creepy.  Disturbing, even. 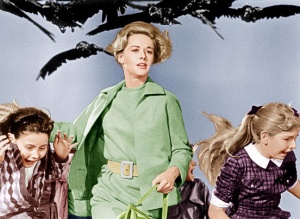 But again, I just can’t help but ask, “why?”  And why birds?  I mean, is this role reversal more frightening than if it were any other animal?  Could it have been dogs?  The Dogs.  What about killer bees?  The Bees.  I don’t know.  Maybe, viscerally speaking, aesthetically speaking, birds are the creepiest.  Even so, what’s the reason?  Why are these birds stalking this woman as if she’s some sort of poisonous feed?  As I search for a deeper meaning, any meaning, something occurs to me.  The Tippi Hedren character is blatantly wearing a luxurious fur coat in every single scene up until the midpoint.  I should also say, she’s the only character who is ever seen wearing fur throughout the entire picture.  Interestingly, after the midpoint, she is never seen wearing the fur coat again, until the very last moment in the film.  This observation isn’t necessarily a reason or an explanation as to why the birds attack, as it may just be a coincidence, or simply a part of her characterization—but I found this motif to be important.

Another provocative theme is captured in what is probably the most iconic image of the entire movie, when Tippi’s character is forced into the phone booth by the maniacal birds.  The roles here are ironically reversed, as the uncooperative birds are now in charge and it is us who must cooperate with them.  This reversal is ominously foreshadowed with a piece of dialogue that appears early in the movie: “I just thought you might like to know what its like to be on the other end of a gag.”  Okay.  Creepy.  But from this perspective, one wonders what the birds might represent?  Perhaps they embody the underclasses breaking free.  And Tippi and her fur coat represent the privileged upper classes.  Or, to put slightly more specifically, perhaps the birds represent any minority anywhere in the world.  They represent “the other.”  Or how about this: the birds are the “99%.”  Yes!  Or maybe it’s an anti-fur film.  Or maybe it’s about nothing. 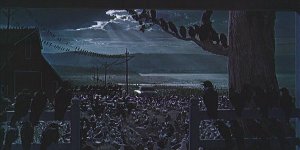 I don’t know.  There is no answer.  It’s absurd.  It’s all about as absurd as a mass of birds deciding to wage war and cage humans for no apparent reason whatsoever.  After all, “Birds don’t just go around attacking people without no reason.”  Yet it is precisely this absurdity that illustrates, comments on, and reflects the very real absurdity of mankind doing the exact same thing.  After all, if it’s absurd for birds to do these things, shan’t it be absurd for humans too?