Imagine you’re enjoying a hot cup of Joe at the trendiest, most eco-friendly coffee shop in town.  In one of the corners, an ultra hip hipster strums his acoustic guitar and sings Phillip Phillips’ “Home” in a soothing, laid back manner, which provides for a nice meditative atmosphere.  And as you sip at your brew for over an hour and a half, you overhear a spattering of very intimate conversations between a diversity of young adults.  Some of these conversations are bizarrely funny, some are deadly serious, and others are just outright strange.  This is how I’d describe the tone of Away We Go (Sam Mendes, 2009), a road-trip romantic comedy that tends to be more of a drama than a comedy, with subject matter that surrounds a young couple who are urgently trying to figure out the best way to raise their soon-to-be newborn child.  Luckily, these unorthodox characters have a great sense of humor and share an even better chemistry, which helps us navigate through this serious material.

The end result is a cozy, yet intimate movie that poses two universal questions.  The first is, what is home?  Is it simply a collection of things and people stuffed between four walls in a specific place?  Or is it something more?  If it is something more, what is it and how would you describe it?  The other question, which is perhaps more elusive, is what’s the best way to raise a child and start a family?  These basic, fundamental questions are what the main characters are exploring throughout, as they travel from place to place, with each new locale providing a different perspective on these inquiries.  Interestingly enough, what these characters reflect is a new, up-and-coming generation who are seemingly untethered from the traditions of the past, and who are searching for perhaps a newer, better way. 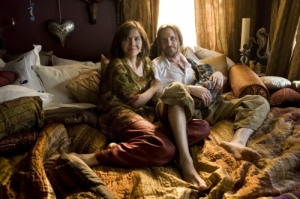 What they ultimately discover utilizing this open-minded approach is that on one hand “home” is not just a collection of stuff accumulated in a certain location, rather that STUFF is just the raw materials that creates a foundation.  What holds all of this together, what makes it a “home” regardless of where it is or what is actually in it— is love.  Home is where love is, and in theory, love can be anywhere, shared between anyone.  Now, regarding the other question (how to best raise a child and start a family), their discovery is two-fold.  On one level, Away We Go suggests that the traditions that have been laid before us are indeed the best way to raise a child and start a family.  They are tried and trued.  But on a contrasting level, it simultaneously claims that some of those traditions are demonstrably flawed.  “Bad parents still get to be bad parents.”  With this, the filmmakers seem to be suggesting that there is no answer.  Because, inevitably, the question becomes, “what is best?”  Define “best.”  And “best” is relative.  So, of course there is no answer because there is no one right way.  There is only your way.  You can only do the best you can.  You hope that you’re lucky.  You hope you know the answers.  You hope you teach the right lessons.  You hope that you’re not a fuck up.  And regardless of the methodology you employ and eventually pass on, at the end of the day there is but one thing you can consistently hope to bank on:  home.

In your best Tony-the-Tiger impression, you exclaim: “I’m grrrreat!”  And maybe you really are great, maybe you’re not, maybe you’re somewhere in between, or maybe you’re none of the above.  Either way, the answer to this question is basically your own personal commercial for how “normal” you are, even though you know you are anything but.  And it is this disciplined way of masking our genuine selves that American Beauty (Sam Mendes, 1999) is essentially about— how there is an “entire life behind things.”  All things.  Even dancing plastic bags.  And that there is no such thing as ordinary.  Everything, everything, everything… is far from ordinary.  Like you.  Like me.  Like life itself.

But because we are disciplined, structured, well-adjusted citizens, we instinctively give a politically correct answer.  Like, “I’m good.”  Or, “I’m okay.”  If you don’t give such an answer, you risk being fired, or sent to a mental hospital, or put on drugs, or yelled at, or questioned, or judged.  So, instead, we suppress our true feelings and go about our daily lives in a sedated manner, constantly enabling the forces behind the status quo, “masking our contempt for the assholes in charge.”  This anaesthetized way of life might be preferred for a complacent society, but the danger is, this kind of lifestyle will fester behind the white picket fences until it blows up and causes a mid-life crises.  Or divorce.  Or plastic surgery.  Or murder.

Which brings me to the most important, most haunting line of dialogue in American Beauty.  “Never underestimate the power of denial.”  This pointed warning is accentuated in all of the character’s, from Allison Janney’s devastating portrayal of a shell of a human to Kevin Spacey’s nuanced portrayal of a married man going through a mid-life crises.  From Annette Bening’s failing real estate agent to Chris Cooper’s homophobic colonel.  All are living in varying degrees of denial.  This heavy specter hangs over the entire film like the red motif that appears throughout, and lingers in the mind far after the conclusion due to the tragic climax.

Technically speaking, American Beauty masterfully walks the line between a biting, smart dark comedy and a phenomenally executed tragic melodrama.  This adroit combination led to five Academy Awards and a film that really struck a chord with the zeitgeist at the time.  And perhaps it struck such a chord with audiences because, in a way, the movie acts as a grand therapeutic session.  Along the way, as these deeply flawed characters hide themselves, reveal themselves, revolt, throw tantrums, breakdown and cry, we too go through a similar journey, and by the end we feel like we’ve gotten something off our own chests.  We feel relieved.  More importantly, we feel grateful for life. 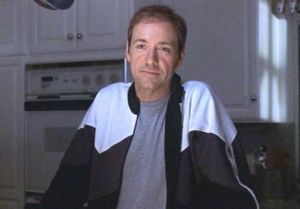