Blood Simple (Joel & Ethan Coen, 1984) marks the first major directorial effort from the Coen Brothers, and while it doesn’t boast the charismatic camera-work and the over-the-top characters found in a lot of their later work, it does employ a spectacular script the Coen’s are now typically known for.  It is tidy and concise, while managing to be riveting and mysterious almost from top to bottom.  It builds upon a concept that is straightforward and primal, with each scene resembling a masterful sequence – with a distinct beginning, middle, and end – that effectively works as a short film unto itself.   In other words, each segment starts off rather slow as it settles in, builds to an ironic twist at the midpoint, and then aggressively moves to an impactful climax which is often another ironic twist.  The majority of the scenes operate in this keen way, and the effect is mesmerizing, especially during the potent first half. 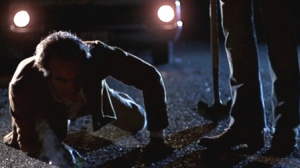 The second half starts off a little muddled, but once the rhythms take hold, that mesmerizing grip arises again, and the film is able to build to a thrilling finale that is unexpected and memorable.  Mirroring the rhythms of the script are the sharp waves of violence, which are used sparingly, but when used, they are powerful.  This restrained approach echoes through all of the technical elements, complimenting the material quite nicely.  This, of course, includes the photography, which is a whole lot less eccentric compared to a lot of other film noirs.  This is a surprising revelation considering who’s at the helm, but it is a good surprise, because while Blood Simple is dark and shadowy like many other film noirs, it remains grounded in a way that adds to the suspense.  That isn’t to say that there aren’t any memorable images, quite the contrary.  In fact, because the film is so economical in its approach, almost all of the images captured are vivid and serve both the context and the subtext.

One other tangible difference between the debut effort from the Coen Brothers and their later work are the performances.  Here, they tend not to be as outlandish or bold.  Sure, there’s some quirk here and there, and the characters are well drawn, but the tics and tacks are minimal compared to the audacious characterizations found in their later projects.  Again, this minimalist, restrained approach tends to benefit the material, and the resulting performances are full of intensity and strength.

In general, I would say that Blood Simple is a riveting thriller with themes that are as murky as the shadows in which these deadly characters lurk.  On the surface, the film works exceptionally well and is gripping throughout.  Digging underneath the surface, we’ll find the familiar-Coen-Brother-philosophical-touch that offers the audience something to chew over and to interpret long after the blood has dried.

The Big Lebowski (Joel & Ethan Coen, 1998) is a ramblin’, complex, ambitious “who-dun-it?” story, in which the answer is ultimately revealed as: nobody.  Nobody dun did it.  Like the Nihilists in this movie, the plot essentially amounts to nothing.  In this Hitchcockian sort of way, the entire plot is merely an excuse to experiment with all of these outrageous characters, most notably, of course, is The Dude, played awesomely by Jeff Bridges.  And while The Big Lebowski feels like a convoluted, plot-heavy film— with “lots of ins, lots of outs”— it’s actually more akin to an intimately detailed character study.

That character, The Dude, closely resembles the tumbling tumbleweed shown in the opening prelude, as he is so easily blown from one escalating plot point to the next, with each subsequent episode mounting in absurdity, containing more outlandish characters, and displaying an increased amount of preposterous visuals.  This tumbling tumbleweed of an apathetic character is exemplified in his own motto: “fuck it,” as well as the place in which the story takes place— Los Angeles.  The Dude is Los Angeles and Los Angeles is The Dude.  What’s most bitingly ironic about this lazy, pacified characterization is that the entire crux of the story depends on The Dude reacting to the inciting incident in a way that defies his very own ethos.

In other words, because of the persuasive abilities of his outspoken friend Walter, The Dude breaks with his usual pacified mentality, and decides to take a stand against what he perceives to be unfair, unchecked aggression.  After all, they peed on his fucking rug!  Adding to this irony, of course, are all of the disastrous, unintended consequences of taking said action, which could have been avoided if The Dude were only to stick to his original “fuck it” motto.  All’s he had to do was let it be, and cope with a pee-stained rug.

But alas, that is not what happened, and I get the feeling— based on the movie’s popularity and cult following— that the story could have been just about anything, and what makes this material work are the supremely detailed characterizations of it’s many zany characters.  I mean, just take John Turturro’s “Jesus” character, for example.  This character is totally ludicrous, and is entirely irrelevant to the actual plot of the story.  He doesn’t push the story forward; instead, like so many other moments in The Big Lebowski, he is simply a digression.  Even so, because the details are as specific and peculiar as they are, and because the casting and performances are so spot-on, these moments and characters not only work, but they end up being some of the most effective, memorable, entertaining parts of the entire film.  Speaking of memorable, the screenplay penned by the Coen’s is so smart, and is full of so many quotable lines of dialogue you will need to drink a spiked “White Russian” just to get them out of your head (not that you would want to).

But putting aside all of the kooky madness The Big Lebowski has to offer, what ends up rising to the top is an hallucinatory morality tale about power, perceived power, and using that power for leverage.  What’s interesting about this dynamic, particularly the way it is framed in this movie, is that the perceived power— whether the source is money, sex, or violence— is merely that: a perceived power.  An illusion.  Its only power if the so-called “lesser” person agrees to give it power.  By feeding it.  And I get the impression that the Coen’s are suggesting that meeting an aggressive act with an aggressive act is what feeds it.  Or, like I mentioned earlier, The Dude’s troubles could all have been avoided if only he were to ABIDE by his original pacifist worldview and life-engrossing motto: “Fuck it, let’s go bowling.”

Movies, like dreams, are the life of the mind, and Barton Fink (Joel & Ethan Coen, 1991) is one of the most mysterious, paradoxical minds of all.  The story— a bizarre mix of classical filmmaking and abstract surrealism— is about a critically acclaimed playwright turned screenwriter who is battling expectations and writer’s block while the pressure from a major Hollywood studio mounts, as does the temperature outside.  “We’re all expecting great things from you,” the executive cryptically says.  But just like good screenwriting, Barton Fink is more about what it doesn’t show, than what it shows.  It’s what’s on the other side of the peeling wallpaper.  It’s what’s outside the frame.  It’s what’s inside the box.  It’s what’s inside the head.  Hell, it’s what dreams are made of!  This dream just happens to be more of a strange nightmare, the lingering unsettling kind that you can’t quite shake after you wake up.

Dreaming aside, Barton Fink is an exquisitely made movie that boasts an all-star cast, all providing superlative performances.  The most noteworthy of which is Michael Lerner’s, whose portrayal of an alpha, silver-tongued movie executive is both outrageously hilarious and frightening at the same time.  The cinematography offered by Roger Deakins is crisp with a golden glow (speaking to the “Golden Age of Cinema”), and contains all of the playful camera movement typically found in a Coen Brother’s picture.  The art direction is apt, especially in terms of the creepy, dust-layered, seemingly secluded Hotel Earle that acts as another character unto itself.  And in addition to all of these well-executed elements, is a baffling screenplay that makes you think you know what’s going to come next, but then suddenly goes in a completely different direction.  It is ripe with visual rhymes and echoing motifs, consisting of an uncountable number of references to boxes and heads, including the Eraserhead-like hairstyle of Barton, the mysterious picture frame that constantly prods us to look deeper, as well as the ominous package left behind by John Goodman’s character.  By end, all of this poetry and perplexing depth almost makes you want to pull off your own head (pun intended).

But there is yet another thing this movie does— and perhaps this deals more with its commentary on Hollywood— and that is it creates a paradoxical tension between the creator and the subject.  Between Hollywood and the Audience.  This duality is exemplified in the relationship between John Turturro’s Barton Fink and John Goodman’s Charlie Meadows.  On one hand, Barton’s passionate appeal to making more stories about the “common-man” comes off as arrogant, judgmental, and condescending.  Though his intentions may be well placed, they are misguided.  “You think you know pain, but you’re just a tourist with a typewriter.”  This seems to suggest that the insular Hollywood is clueless, and is thusly misreading and misrepresenting its audience completely.  Or as Charlie clarifies: “You don’t listen!”  With this, the Coen’s are either saying that the audience is stupid, and that they desire only formulistic, easy to understand movies; or that Hollywood doesn’t give the audience enough credit for being smarter, and therefore should provide more thought-provoking material.  Whether that’s what the “common-man” actually wants or not, I can’t say.

And as I write this, I realize Barton Fink, the movie, would be laughing at me right now.  Laughing at me for writing this.  Laughing at me for reading so much into it, and trying so desperately to interpret the various meanings.  I admit this; I say this, because the movie explicitly tells me so.  It’s written in text, in the Bible, so it’s clearly important.  I even paused the movie to be able to write this text down:

“And the king, Nebuchandnezzar, answered and said to the Chaldeans, I recall not my dream; if ye will not make known unto me my dream, and its interpretation, ye shall be cut in pieces, and of your tents shall be made a dunghill.”

My initial reaction to this strange text is that it is absurd and ironically reflects the absurdity of an eager viewer like me trying to desperately interpret this movie.  It’s like trying to recall and interpret someone else’s dream for them, simply by dissecting the way they are eating their salad at lunch.  It’s absurd.  But this text also self-reflexively comments on writing in general, and in particular, writer’s block.  That is, writing isn’t the physical act of typing words into a typewriter, or even seeing words on a page.  Writing happens before that.  It happens in the mind.  It is the intangible challenge of recalling an unknown distant dream, making known that dream unto yourself, and then interpreting it in a way that appeals to all, even the “common-man.”  To be unable to recall this dream, however close to the tip of the tongue it may be, is to be stuck as a writer.  It’s to be me at the end of this movie. 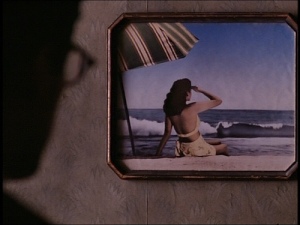