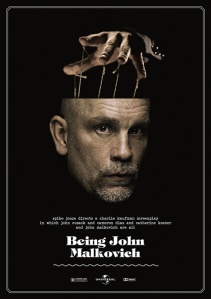 Right now I’m looking at myself in the bathroom mirror, which is spotty and needs to be cleaned.  Instead of whipping out the Windex, I look past the water spots and examine my hairline, which, by the way, is receding way too quickly.  At least, in my opinion it is.  I look at my nose.  I look at my ears.  I look at my probably unhealthy skin, and at the wrinkles on my forehead and around my eyes…  Fuck…  My gaze then fixes upon my gaze.  My eyes are looking at my eyes.  And I wonder, “am I me?”  Is the voice inside my head legitimately mine?  Or does it belong to a shifty, morose puppeteer pulling at my strings somewhere from within?  If so, how did he get there?  And more importantly, how the fuck do I get him out?  Shit.  Is God a morose puppeteer?  No.  Stop it.  It can’t be.  I’m in control.  I am.

These uncertain philosophical questions regarding the nature of self is what Being John Malkovich (Spike Jonze, 1999) is essentially about.  Take the mind/body problem, for example.  How can the mind— invisible formless matter— be confined and relegated to a single body, a physical, tangible, touchable thing?  Why doesn’t the mind simply just float away?  Does it float away?  Can it float away?  Or is it truly bound to the physical body?  … Is there a physical body?  Look, what I’m trying to ask is this— is the mind a result of the body or is the body a result of the mind?

Perhaps offering an answer to these unanswerable questions, through a sort of hypothetical, bizarre trial and error system, Being John Malkovich demonstrates that the body is indeed the result of the mind.  Or, in other words, you are who you are, despite the physical body in which you reside.  Even if you could crawl through a portal on the seventh-and-a-half floor and into John Malkovich’s body, that wouldn’t change who you quintessentially are.  The body, in time, would simply change to reflect that mind (just as John Malkovich’s body does in this movie).

Deep metaphysical questions aside, what this movie also does is it examines our “15-minutes-of-fame,” reality-TV-obsessed culture.  Why, for example, would someone, anyone, want to change bodies?  I presume it has something to do with looking into the mirror and not liking what you see reflected back at you.  This feeling of inadequacy is inflicted by a superficial, manipulative society that places too much importance on physical appearance, rather than inner appearance (the mind), which as I discussed earlier, is actually what is relevant to who you are.

Speaking of manipulation, one of the more intriguing characters in Being John Malkovich is Catherine Keener’s Maxine, the one character who seems to be in total control the entire time.  She, unlike the others, seems to always get what she wants, either through manipulation or otherwise.  Ironically enough, she is also the only character who doesn’t desire to crawl through the portal and into John Malkovich.  In this way, she is the master puppeteer.  Not in a cynical way necessarily, but because she is the most confident.  She knows who she is, and she accepts it, thusly allowing herself to be open to following through on her instincts.

Well, apparently Charlie Kaufman knew, who, I get the feeling, was making it all up as he went along.  As if he thought of this incredible concept and just dove head first to see where it took him.  This is an admirable, bold way to tackle a screenplay, and while the result is a somewhat uneven journey, it’s also one that is full of laughter, surprises, distinctiveness, wit, and it ultimately leaves you in an unsuspecting place you never expected to be when you first began the journey.  For that, I’m thankful.

Oh.  And disregard that thing I said at the outset about my receding hairline.  I’m actually having a FABULOUS hair-day today.

I'm Kane, a screenwriter who lives in Los Angeles. END_OF_DOCUMENT_TOKEN_TO_BE_REPLACED
This entry was posted on Tuesday, October 16th, 2012 at 1:38 am and tagged with Academy Awards, Being John Malkovich, Catherine Keener, Charlie Kaufman, comedy, entertainment, John Cusack, John Malkovich, metaphysics, movie review, philosophy, Spike Jonze and posted in Movie List. You can follow any responses to this entry through the RSS 2.0 feed.
« 20. Beginners
22. Best In Show »

One response to “21. Being John Malkovich”