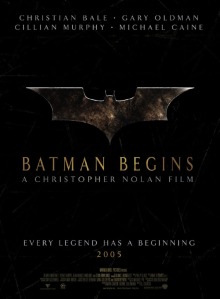 I should probably start by declaring that I have yet to see the third and final installment of Christopher Nolan’s “Batman” trilogy, The Dark Knight Rises.  I should also say that it’s been quite a while since I’ve seen the second installment, The Dark Knight.  And so, while I can’t say for sure what this all builds up to in the end, I can confidently say that this entire franchise is essentially Christopher Nolan’s reaction to the War on Terrorism.  And I don’t mean to bring politics into this, or to be divisive, but Batman Begins (Christopher Nolan, 2005), more than anything, establishes and initiates a dynamic conversation regarding idealism and realism.  Both domestically and in regards to foreign policy.

Putting that aside for the time being, I can’t help but think that this “Batman” is the “Batman” its fans have been waiting for and clamoring for their entire lives.  Which isn’t to say that Tim Burton’s “Batman” was entirely inadmissible, because if nothing else, those movies were at least somewhat entertaining, and even somewhat funny.  They, at least, had a certain discernable quality that can be attributed to the vision of Tim Burton.  However, that tongue-in-cheek approach will always result in a tongue-in-cheek movie, which at best is somewhat amusing and at worse is Batman and Robin (1997).  To me, this approach reflects filmmakers who don’t quite believe 100% in what they are doing.  Let’s just say, it can go wrong.

Batman Begins, on the other hand, takes the complete opposite approach.  Here, they decide to hire a competent, self-assured, established director whose style not only meshes well with the content, but who is also an artist that doesn’t take his subjects anything but seriously.  This resoluteness reverberates throughout.  And the result is a fully realized movie pregnant with meaning, as well as a consistent, unyielding tone that compliments the core of the story, and creates a perfect environment for all of the technical departments to thrive in.  What you end up with is an inspiring epic that is visually impressive, psychologically complex, and dark and gritty— just like its main character, Bruce Wayne.  Speaking of, one of the more fitting lines of dialogue now comes to mind: “A guy who dresses up like a bat has issues.”  Couldn’t have said it better, Bruce.  Couldn’t have said it better…  And in this way, among many other ways, Batman Begins is about mental health.  Or should I say mental sickness?  At any rate, it’s about how fear lies at the heart of all of these conflicts, whether mental or otherwise, and that fear is the essence of the entire “Batman” saga/persona.

Which brings me back to my original point regarding politics and the War on Terrorism.  Fear is at the core of the terrorists, as well as the politicians who react to the terrorists.  So, in a way, the initial incarnation of Christopher Nolan’s “Batman” represents our initial reaction to the terrorists.  That is, beat them at their own game.  Crush them.  Put fear into their hearts.  The problem with this— and this is reflected in the moral struggles and lessons Bruce Wayne learns throughout— is that this fear-based reaction, however righteous the initial intentions may be, actually makes things worse.  It prolongs the cycle.  “All creatures feel fear, especially the scary ones.”  By this rationale, if an increased amount of fear is implemented to deter the enemy, that enemy will only become more fearful and therefore incrementally scarier (i.e. the Joker).  This behavior, in the real world, is referred to as an escalating “arms race.”

Speaking of the real world, Batman Begins works as an economic allegory as well.  Just take a look at the setting in which the movie takes place.  Gotham City, which consists of deteriorating infrastructure, too much crime, a widening gap between the rich and the poor, a corrupt government, corrupt corporations, and well…  I can go on further, but I have a feeling you get the idea.    And before I start to sound too gloomy, let me end with what I think is Christopher Nolan’s overall impression he wants to leave us with.  That is, in a word: cooperation.  Not idealism or realism.  Not liberalism or conservatism.  Not public or private.  Not “or,” but “and.”  Idealism AND realism.  Liberalism AND conservatism.  Public AND private.  Both!  Like “Batman” himself, who epitomizes the idea of a private corporation serving the public, not for profit, but for the greater good of mankind.  Economic patriotism, if you will.  A cooperative merging that isn’t based on a blind devotion to an ideology, rather, a devotion to an ideal.  And together we will move towards that ideal— rebuilding together, struggling together, and ultimately confronting and facing our biggest fears… together.

I'm Kane, a screenwriter who lives in Los Angeles. END_OF_DOCUMENT_TOKEN_TO_BE_REPLACED
This entry was posted on Tuesday, October 9th, 2012 at 2:44 am and tagged with Batman, Batman Begins, Christian Bale, Christopher Nolan, entertainment, idealism, movie review, realism, terrorism and posted in Movie Review. You can follow any responses to this entry through the RSS 2.0 feed.
« 18. Barton Fink
20. Beginners »